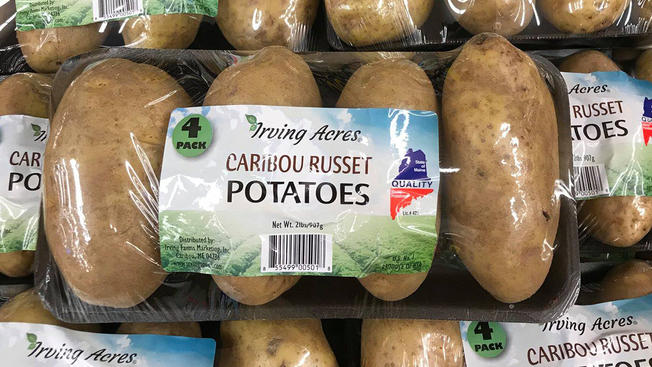 Caribou Russet Potatoes Back on Shelves, Soon in Restaurants

PRESQUE ISLE, MAINE – The Maine Potato Board has announced that the Caribou Russet potato will once again be available to consumers at the Maine Harvest Festival in Bangor this weekend. This marks the fourth year the Caribou Russet is being made available at the annual festival celebrating the fall harvest from farmers and food producers.

“The Caribou Russet is taking on a life of its own,” said Don Flannery, executive director of the Maine Potato Board. “Demand is high not just for the potato itself, but for the seed to grow it, which is a key indicator that it’s going to be around for a long time.”

The Caribou Russet hit store shelves with limited supply in 2016. A year later, Hannaford stores began stocking the new variety in its produce sections throughout Maine. Today, Hannaford and Stop & Shop stores are carrying the Caribou Russet and it is available to some smaller supermarkets as well. Restaurants also have access to the Caribou Russet this year, as demand has grown to include chefs and the food service industry.  In the time since the release of the Caribou Russet, acreage has increased to 3,900 acres which is 7.5% of all the potatoes planted in Maine.

The 9th annual Maine Harvest Festival is presented by the Maine Potato Board, and runs Saturday and Sunday, Nov. 23 & 24, from 10-4 at the Cross Insurance Center in Bangor. The festival features 200 vendors throughout the Cross Insurance Center, entertainment, contests, and demonstrations. Tickets are just $8 per person, $5 for Veterans with a valid ID at the door, and kids under 12 are admitted for free.

The Caribou Russet was developed by the University of Maine, and is a dual-purpose, russet-skinned variety with high yields, mid-season maturity and moderate common scab resistance. In addition to fresh-market consumption, the new variety is also useful for processing markets.

For more information on the Maine Potato Board, visit www.mainepotatoes.com.