Maine Potato Board Announces 2020 Young Farmer of the Year 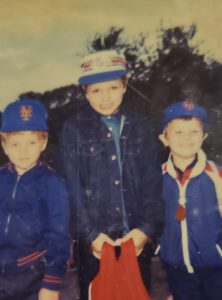 (PRESQUE ISLE, MAINE) – The Maine Potato Board directors have announced that Matt Griffeth of Caribou has been selected as the 2020 Young Farmer of the Year, along with his brothers John Jr. and Stephen Griffeth. The brothers farm in Caribou, Limestone and Fort Fairfield, raising potatoes and small grains. The Griffeth brothers attended Caribou schools, and Matt has a bachelor’s degree in business finance from Plymouth State College in New Hampshire. Parents of the brothers are John Sr. and the late Rebecca Griffeth. The Griffeth family has been producing potatoes and small grains in Northern Maine since the 1930s, and John Sr. still farms daily with his sons.

The brothers have always been involved with daily farming operations, particularly as they finished school, and in 2009 they formally established Triple G Sales.

“We’ve been growing our productivity and enhancing the quality of our crops ever since,” said Matt. “It’s what we all wanted to do and with a lot of work and good planning, we are where we are today.”  Growing up as a farm family, Matt said the brothers have always wanted to farm, and when opportunities presented, they joined their skills and desire and became intimately involved with the farming operation. Each brother plays his significant role and they moved forward.

“One of our goals was to bring our crop production into a three-year rotation,” said Matt. “With good planning and good care of the soil, we have reached that benchmark, which we considered essential to our growth. We utilize today’s technology in our farming practices, from GPS auto steer to variable rate nutrient applications. Today’s farming requires a significant investment, but there is also a payback for those investments,” added Matt.

When Matt was asked for his advice and thoughts for younger growers, he shared a few observations:  The availability and cost of tillable land can be daunting, but this occupation is very, very rewarding. Being able to raise a family in the farming environment instills great values in your kids, teaches them a true work ethic, and gives them a real sense of the role of agriculture in today’s society. Any thoughts for the future? Matt replied he feels that the large family farms involved in today’s potato production need to work together. “It’s very, very important to maintain relationships among one another, to work as one. The future of Maine’s potato industry is strong. But it requires those of us in the industry to reach out to one another, share thoughts and find ways to work together,” commented Matt.

The Griffeth brothers have their own families growing up in the farming environment. Matt and his wife Danielle have two children, Annalise and Joslyn; oldest brother John Jr. and Kim have three children, Gracie, Grayden and Charlie; and youngest brother Stephen and Amber have four children, Blake, Brennan, Chase and Soloman.  Seems like the Griffeth family is probably set for the future.

“We’re very pleased to recognize Matt Griffeth as the 2020 Young Farmer of the Year, along with his brothers John Jr. and Steve,” said Don Flannery, executive director of the Maine Potato Board. “The young farmers in the Maine potato industry demonstrate resiliency, enthusiasm and the ability to address whatever issues arise.  I’m confident the industry is in very capable hands.”