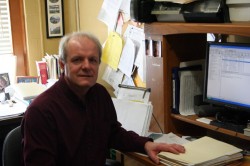 Porter has been a member of PAA since 1981, and served as vice president, president elect and president. From 1998 to 2002, he was senior editor of the “Production Management of the American Journal of Potato Research.” He also helped organize two PAA meetings that were hosted in Maine and served on numerous committees for the organization.

Porter, who grew up on a potato farm in Aroostook County, has dedicated his 38-year career at UMaine to improving potato production in the eastern United States. He has conducted research on crop and soil management practices for improving the yield and quality of potatoes and other crops. In the past decade, Porter has released five new varieties in partnership with the Maine Potato Board — Easton, Sebec, Caribou Russet, Pinto Gold and Hamlin Russet. The Caribou Russet has proven highly successful, rising to 1,476 certified seed acres in 2021 (No. 2 in Maine, No. 16 in the U.S.), with an estimated cash farm value of approximately $41 million in 2022.

“Dr. Greg Porter’s hard work within the potato industry has provided invaluable research in improving potato production. The University of Maine’s potato breeding program has shown tremendous success and this program wouldn’t be where it is today without the dedication and leadership of Dr. Porter,” says Jeannie Tapley, director of operations at the Maine Potato Board.

“The Maine Potato Industry has been extremely fortunate to have him in our corner and we couldn’t think of anyone more deserving of this award.”

Porter also leads the Northeast regional potato breeding and variety development project (NE1731), a regional collaboration that spearheads evaluation and release of new varieties. His efforts to compile research results from universities across the eastern U.S. and disseminate them to growers are instrumental in the project’s success.

“Greg didn’t care what program developed the varieties, only that they were beneficial to Maine growers,” says Kathleen Haynes, a retired research geneticist at the USDA’s Agricultural Research Service.

The intensive potato breeding and variety development process takes approximately 10–12 years. Porter and his team start with as many as 50,000 unique clones each year and conduct research on them over a period of 10-12 year in multiple locations until they have found one or more with production and palatability characteristics they seek. Candidates are meticulously tested at Aroostook Farm, a 425-acre research farm managed by the Maine Agricultural and Forest Experiment Station in the heart of Maine’s potato country. Porter draws from his previous work in agronomy and crop physiology to ensure that potential varieties will thrive in realistic growing conditions.

Porter has authored or co-authored more than 66 scientific journal publications and 250 articles for potato growers and other outlets. In addition to his research, Porter teaches crop ecology and physiology, experimental design, and statistical analysis courses. He served as chair of the Department of Plant, Soil and Environmental Sciences from 2005 until 2010. In 2007, he assumed leadership of the University of Maine Potato Breeding Program.