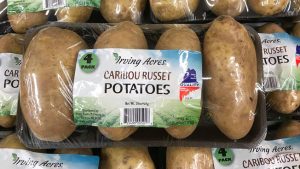 The Caribou Russet potato, developed by the University of Maine, is now available in more stores throughout New England.

In the time since the release of the Caribou Russet, Maine’s russet acreage has increased by 30.6%, or 7,180 acres due in part to the demand for the product.

First announced in 2015, the Caribou Russet is a dual-purpose, russet-skinned variety with high yields, mid-season maturity and moderate common scab resistance. In addition to fresh-market consumption, the new variety is also useful for processing markets and is good for baking, mashing, or grilling.

“One of the questions we are asked the most is how to get Maine potatoes outside of Maine,” said Flannery. “Maine potatoes are in high demand, especially from people who have lived here and moved elsewhere. We are happy that retailers are seeing the same quality in the Caribou Russet that we are.”